Similar to above cases, other possible cases are dereferencing after calling std::move(), reset() or reset(nullptr), getting and explicitly deleting inner pointer, or swapping with null pointer using std::swap (more examples in Appendix). Above all cases will result in a crash.

Another possible solution considered was manipulating symbolic values inside the smart pointer. The limitation that we run into here is that our memory model (“RegionStore”) doesn’t currently allow setting a “default” binding to a whole object when it’s a part (say, a field) of a bigger object. This means that we have to understand how the smart pointer works internally (which field corresponds to what) to manipulate its symbolic value, which ties us to a specific implementation of the C++ standard library. This might still work for a unique pointer which probably always has exactly one field, but for shared pointers it is not the case and has multiple fields. So it depends on the different implementations of the C++ standard library. It has been decided to not go with this approach since this approach is challenging and potentially a lot of work compared to the first approach.

With this patch, the model can emit warnings for cases like use after default constructor, use after release, or use after the reset with a null pointer. Kept the SmartPtrChecker under alpha.cplusplus package and smart pointer modeling have to be enabled by the ModelSmartPtrDereference flag.

D83836: Implemented checkRegionChanges for SmartPtrModeling. To improve the accuracy, when a smart pointer is passed by a non-const reference into a function, removed the tracked region data. Since it is not sure what happens to the smart pointer inside the function.

For example here in the code above, we are passing a default constructed unique_ptr ‘P’ to method bar(). But it is unknown whether the unique_ptr ‘P’ is reset with a valid inner pointer or not inside bar(). To avoid false positives we are not producing any warning on dereference of unique_ptr ‘P’ after bar().

D84600: With NoteTags added more detailed information on where the smart pointer becomes null in the bug path. Introduced a getNullDereferenceBugType() inter-checker API to check if the bug type is interesting.
After adding NoteTags: 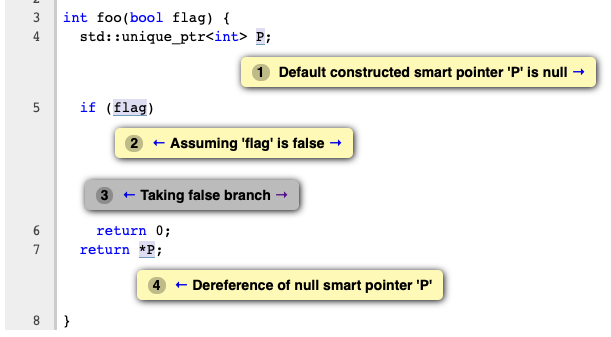 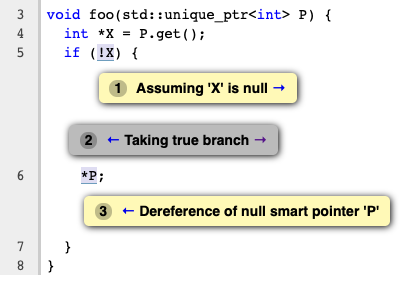 D86027: Modeling the case where unique_ptr is explicitly converted to bool. It is a common practice to check if a unique_ptr is null or not before accessing it. If the inner pointer value is already tracked and we know the value, we can figure out the corresponding boolean value. And the analyzer will take the branch based on that. Using SValBuilder::conjureSymbolVal to create a symbol when there is no symbol tracked yet and we constrain on that symbol to split the Exploded Graph with assuming null and non-null value.

D86027: Implemented checkLiveSymbols to make sure that we are keeping the symbol alive until the corresponding owner unique_ptr is alive to avoid removing the constraints related to that symbol. Also when the unique_ptr goes out of scope, we make sure the symbols are cleaned up.

For example here in the code above, we have to keep the symbol for RP alive since that is tracked as the inner pointer value of unique_ptr P. We have to use the constraints on that symbol to decide whether the branching takes the true or false branch.

D86373: Similar to the = operator, modeled how the unique_ptr moves the ownership of its managed memory to another via move constructor. Then tracked the moved unique_ptr’s inner pointer value as null.

The checker has been evaluated on a number of open-source software projects which use smart pointers extensively(symengine, oatpp, zstd, simbody, duckdb, drogon, fmt, re2, cppcheck, faiss). Unfortunately(or fortunately) the checker did not produce any warnings which are not false positive. But we found 8 true positive warnings related to smart pointer null dereference in LLVM project and 5 warnings in the WebKit project. 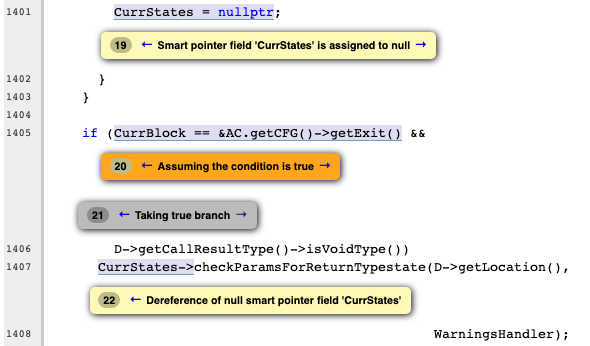 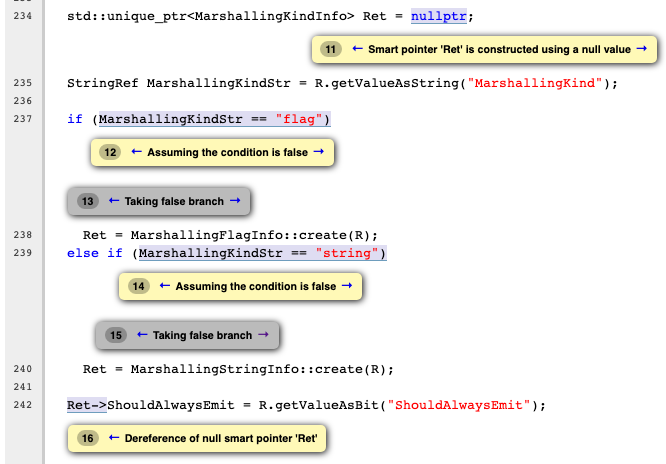 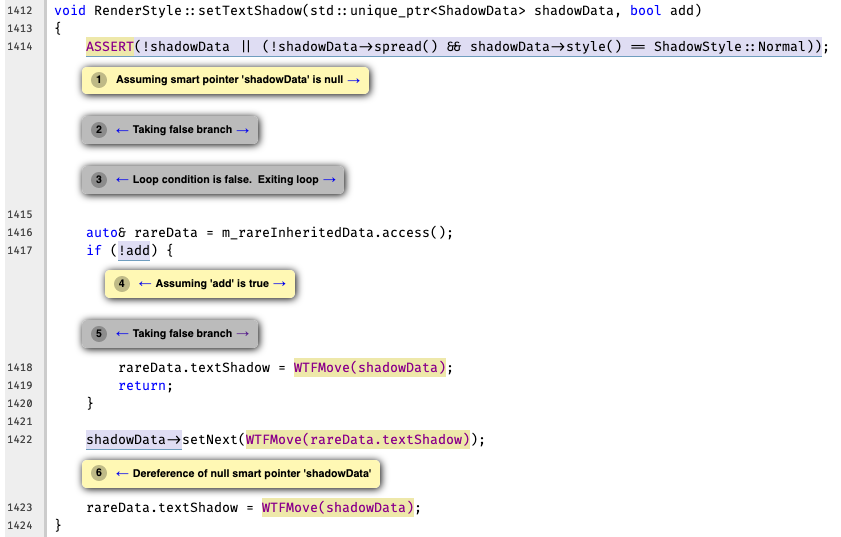 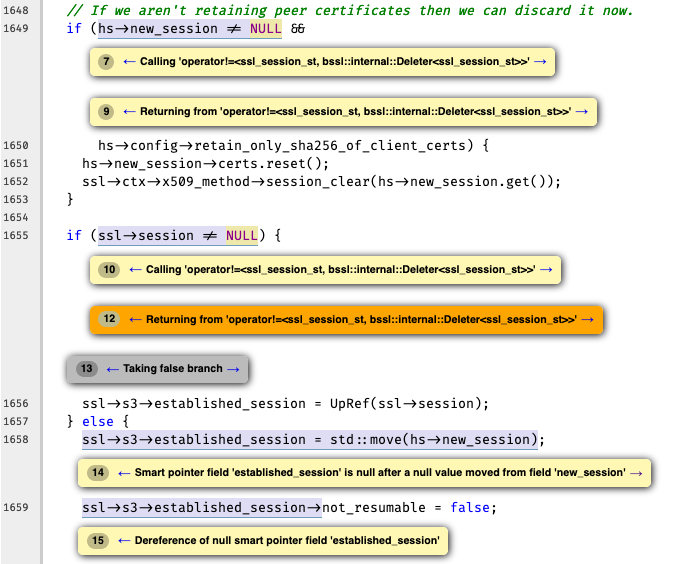 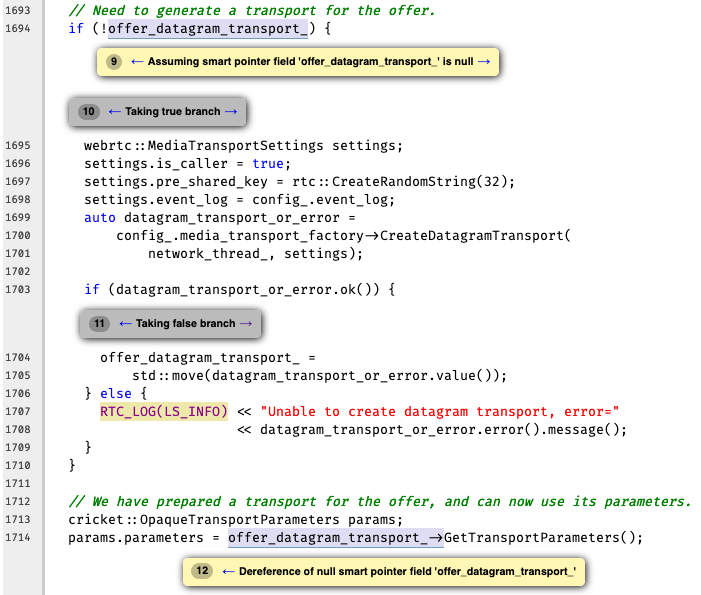 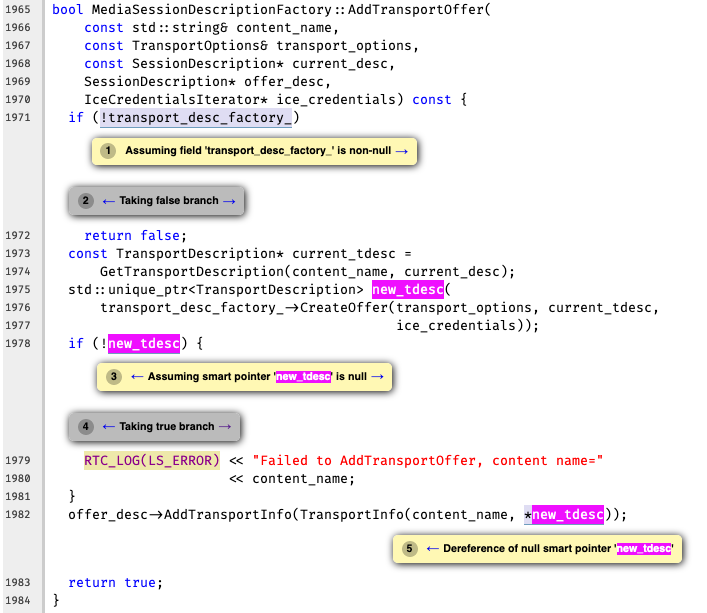 Extend the modeling for std::shared_ptr, std::weak_ptr and std::optional. Right now SmartPtrModeling only models most of the std::unique_ptr, adding modeling for other smart pointers will make the checker complete.

To enable the checker by default we have to use CallDescriptionMap for evalCall. Right now we are manually implementing the name matching logic that has been already implemented in CallDescriptionMap. But the support for the Constructor and Operator calls are not supported yet and changes are in review(D81059, D80503) by Charusso.

Enabling the checker by default

The SmartPtrChecker is under the alpha.cplusplus package and smart pointer modeling has to be enabled by the ModelSmartPtrDereference flag. Enabling the checker by default will benefit codebases that use smart pointers.

For example the code below is a true positive warning.

On the other hand, the code below is a false positive warning. We cannot infer unique_ptr Q is null in bar() based on the check if(P) in function call foo(). So the warning should be suppressed.

We have to investigate more on real world projects and see trackExpressionValue() is sufficient for suppressing all false positive warnings related to inlined defensive checks.

Marking regions as not interesting

Right now there is no API similar to markInteresting() for marking the region not interesting in a bug report. With this support, our checker can remove less useful and unwanted notes showing in the report. For example, when a unique_ptr is referenced after the release() we don’t have to show a note tag on the unique_ptr constructor unless it is constructed with null. 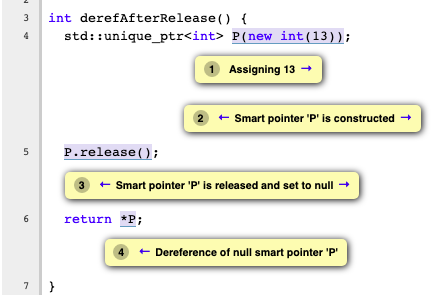 After: marking P not interesting 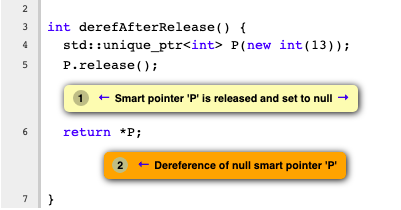 All the changes are in the master. But the checker and modeling are not enabled by default. Checker is under the alpha.cplusplus package and smart pointer modeling has to be enabled by the ModelSmartPtrDereference flag.

Checker and modeling can be enabled explicitly:

I want to express my gratitude towards everyone that helped me with this project, but especially to 3 individuals: My mentors, Artem Dergachev, Gábor Horváth, and Valeriy Savchenko. With their guidance, I’ve learned a lot about how Clang Static Analyzer works during the summer. I got to skype with them every Monday and received all the help and suggestions. When I got stuck with issues I got immediate help even on the weekends. Also, I received very fast feedback for my review requests. I am also thankful to Kristóf Umann for tips and comments on the reviews.

Thank you very much for the support and mentoring.